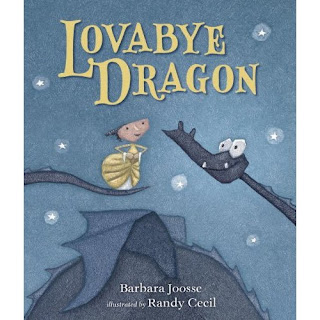 We are happy to tout Barb Joosse's upcoming title (illustrated by Randy Cecil, edited by Joan Powers) from Candlewick. PW's starred review likens Barb's "beautifully bubbly" text to no lesser a god than Margaret Wise Brown "at her best"— Whoa!

FALSH UPDATE
a new *starred* review, from Booklist! Joosse’s poetic, lyrical text is chock full of beautifully cadenced rhyme and repetition... Cecil’s softly textured illustrations have charm in spades...Children will likely ask for this one over and over at bedtime, and may fall asleep wishing they, too, could be snuggled in the curl of a dragon’s tail.
IS LOVEABYE DRAGON HEADED FOR CLASSICDOM?