in Austin, anyway, BUT beating out The Hunger Games, Judy Moody, and Super Diaper Baby 2 is no cinch, and it sure bodes well for Jeff Crosby's cute-cute critter. here, look. (you have to scroll down for the Children's List.)

Of course you want to know more about Jeff (who wouldn't?). Quell your curiosity here.
1 comment:

A Silly Song (our occasional feature)

Humpty Dumpty sat on a wall—
Or so the story goes.
The real event he underwent
No one really knows.

As an egg, of course, HD could not swim.
He sank to the bottom— and everyone forgot him!
Too, too late was the King's lifeguard:
When they fished him out, he was boiled hard.

Acknowledged: the last line uses (in order to scan) the popular convenience of the plural pronoun, which we generally deplore.
No comments: 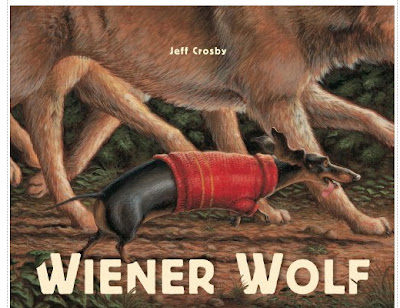 Dachshund picturebooks abound, the classics being Noodle by Munro Leaf and Pretzel by Margaret and H.A. Rey. BUT only inspired author/illustrator Jeff Crosby's WIENER WOLF takes you inside the soul-stirring secrets of the hot dog breed. We see another Skippy Jon Jones here, folks— hint: buy extra copies for friends.
1 comment:

Illustrations! (a taste what's on our tabletop)