take note: the venerable P&E website has adjudged us highly recommended. despite vanity and pride, we pledge to remain humble and approachable— except in the manner of the man who simply walked in the front door Friday. we had a meeting going when Petey (office dog)suddenly barked impressively. a man entered with a portfolio. good grief! i say we are available, but we are not a public service.

it is a year since we moved our submission process to the web— accepting queries via our website. our system automatically collects numbers that might interest you blog perusers.

we receive, on average, 85 queries a week. of these we reject 90% and request partials for ten percent. of these we request full manuscripts for about 40%. i take this relatively high percentage as proof that our requests are well reasoned.

the number of new clients we acquire remains very small, however. NOT THAT WE DO NOT WANT THEM. our latest client is a picturebook author— and this is highly relevant to note: we are not looking for picturebook authors; it means that talent is talent and we will jump when we see it. incidentally, this new client was discovered at an SCBWI regional conference and not through the transom..

i know i speak for my colleagues when i say that discovering new talent is our greatest delight.
No comments:

John is presently peddling our wares internationally, as befits a zealous young agent. this is the best way to keep our subagents on the ball.
No comments:

Only the Young Die Good 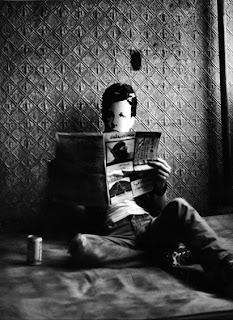 My thoughts on mortality in teen literature, at The New Inquiry.

ten years back, folks talked about "this period of exceptional writing for teens" (think Speak, Out of Dust). since then, since the Harry Potter explosion and A Series of Unfortunate Events and the Stephanie Myer books, the audience for children's books, especially teen books, has opened to encompass the general public (meaning adults). here's an LA Times article about adult interest in teen fiction.
2 comments: 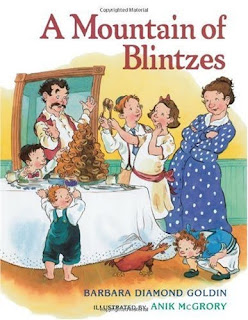 here is one of those rare picturebooks honored with a second life. originally published by Harcourt in 2001, Barbara Goldin's Chelm tale is out in a new paperback edition from our pal Margery Cuyler at Marshall Cavendish. the story is set in the Catskills in the 1920s and celebrates Shavout— the Jewish holiday commemorating the day Moses received the Torah on Mount Sinai, which i would not have known without this book. it is delightful, charming, and satisfying (School Library Journal) and includes Barb's family receipe for cheese blintzes.

note to self: persuade Dunkin' Donuts to introduce its customers to cheese blintzes (license receipe?) and secure a premium co-edition of 18 million copies.
No comments:

Here at last a clear breakdown of the agency model and what it means to authors.

Via Agent Kristin of Pub Rants:

Now let’s look at the difference between net receipts if the publisher absorbs the cost of the agency commission versus if they don’t in defining and calculating net receipts.

If Publisher absorbs commission:
eBook price: $10.00
25% of net royalty (all the rage with publishers as of late)
Royalty to author: $2.50 per title sold

Yep, definitely worth the time to find out exactly how this term is going to be defined in the contract when it comes to electronic books.

Here’s an interview I did for the fabulous Society of Children’s Book Writers & Illustrators. I’ll be sitting on the SCBWI panel at the Bologna Children’s Book Fair this year. Can’t wait!