As you've no doubt heard, Maurice Sendak's immortal WHERE THE WILD THINGS ARE is being made into a movie - and it looks like a good one, if the trailer is to be believed. I'm still holding out for a film version of my all-time favorite children's book, a Chris Van Allsburg title (one that hasn't already been brought to freakish, computer-animated life). No, not Two Bad Ants. I'm thinking of THE Z WAS ZAPPED, in which each letter of the alphabet meets its grim, alliterative end. I envision an all-star cast (live-action, of course) with Downey Jr. as the drowning D, and maybe Zooey Deschanel in the eponymous role. Come on, wouldn't you love to see her in a giant Z costume?

Email ThisBlogThis!Share to TwitterShare to FacebookShare to Pinterest
Labels: Chris Van Allsburg, Maurice Sendak, The Z Was Zapped, Two Bad Ants, Where the Wild Things Are 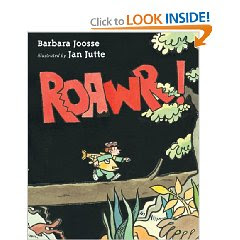 A podcast!
if you wonder how a picturebook derives meaning, listen to author Barbara Joosse, illustrator Jan Jutte, and editor Patti Gauch discuss how an apparently simple story becomes imbued with the tantalizing subterranean elements (e.g., metaphor) that make it resonate, seemingly mysteriously, so kids ask to hear it over and over. ROAWR!
No comments:

Firecracker Julie Phillipps gives a riveting interview in Wired.  http://www.wired.com/geekdad/2009/05/interview-with-julie-phillipps-author-of-wink-the-ninja-who-wanted-to-be-noticed/ Julie's debut is Viking's new hit Wink: The Ninja Who Wanted to be Noticed. Sequel? Spring 2011, thank you very much.
No comments:

You may wish to note that no less than the '09 Américas Award Committee cited— rather, commended Maurie Manning's KITCHEN DANCE (Clarion).
Manning's most exuberant work yet —PW
The previous two titles Ms. Maurie illustrated are How Full is Your Bucket for Kids (Gallup) and Sorry! (Tricycle)— boffo Amazon sales, incidentally.
No comments: