SCIENCE, from our line of educational verses


The prize-winning project
At the state science fair
Was a clay pot of radishes
Growing human hair.


The prize-winning student,
With her parents both in tow,
Shocked those attending
The ceremony show.


The audience could see
They displayed horrid grooming
Upon all three heads?
Row of radishes were blooming!
4 comments:

hang on to your hairdo! Debut Ame's BOY + BOT (with an assist from Dan Yaccarino) got its third star yesterday! This time from Booklist. 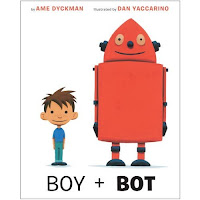 Is any love greater than that between a boy and his robot? While picking pine cones, a boy meets a bright red, rocket-shaped robot and asks, “Want to play? “Affirmative!” the robot responds, and the pair has tons of fun until a rock bumps the robot’s power switch off. Not understanding the bot's unresponsiveness, the boy wheels him home and begins feeding him applesauce, reading him a story, and crafting a makeshift bed. When the boy’s parents, unaware of a robot behind the door, check on their son, the door bumps the robot’s power switch back on. Not distinguishing the boy’s unresponsiveness as sleep, the robot, in a humorous reversal, fears the boy has malfunctioned and carries him back to his laboratory, where he gives him oil and begins to prepare a new battery—when, just in time, the not-evil-at-all invetor shows up to put things right. The spare text (“Boy! You-are-fixed!”) replicates the steady beats of the simple yet comedicstory, while Yaccarino’s expressive, quirky, and humorously geometric gouache illustrations make the boy and robot’s relationship all the more endearing. The final, nearly wordless pages, with snapshots of the friends at play, are priceless. Booklist *starred*

Props for HAPPY LIKE SOCCER! which is not merely a Junior Literary Guild Selection but today also became the proud parent of a glorious PW STARRED REVIEW! (A book gives birth to its review.) We are so proud. This is a vividly heartfelt story, exquisitely conjured by our Maribeth and inspired illustrations from Lauren Castillo. This is a very happy picturebook marriage.
The other girls on Sierra’s soccer team are surrounded by their families on game days, but Sierra’s auntie, a waitress, works Saturdays, and Sierra plays alone: the onlookers “cheer for me by the number on my uniform, not knowing my name.” The plan Sierra comes up with to allow her auntie to see her play—and the courage she summons to put it into action—give Boelt’s (Those Shoes) story unexpected emotional depth. Castillo’s (Melvin and His Boy) quiet ink-and-watercolor spreads make it clear that Sierra’s situation is different from that of the other girls, and that her auntie treasures her niece and keeps her safe. The fenced-in soccer field in Sierra’s urban neighborhood is scruffier than the team’s suburban field, but Sierra’s auntie’s apartment is cozy and welcoming, and so are her words. Class differences (“Then my ride comes, filled with laughing girls who know the jokes I don’t”) and the clash of city and suburban culture are clearly laid out, but softened by supportive adults (Coach Marco asks Sierra if there’s anything she needs, and means it). A thought-provoking read-aloud. Ages 5–9. PW *starred*

HAPPY LIKE SOCCER pubs in May and is Maribeth Boelts's second Candlewick book, again from editor Sarah Kertchersid. their first, THOSE SHOES, is kicking butt on Amazon. (yeah, yeah, anecdotal, blah, blah— but this is eight months running, people!)
No comments:

why hesitate, Gentle Readers? the time is now to extol (or not, if you're crazy) our picturebook list this spring! it is a bonanza! can't you guys chime in or something?
4 comments: